If you are an injured worker and have been paying any attention to the news in Pennsylvania, you are probably aware of the controversy surrounding the Impairment Rating Evaluation (IRE). In 2017, the Pennsylvania Supreme Court found that the guidelines used during an IRE were unconstitutional. This meant that for several months, no employer could request an injured employee take an IRE. In October 2018, the state legislature passed a law that brings back the IRE with some changes.

When a worker has been injured on the job and applies for workers’ compensation, a doctor may find that they are partially or totally disabled.

If a worker is found to be partially disabled, they are eligible to receive two-thirds of their average weekly wage for up to 500 weeks or nine and a half years. There is a limit to how much an injured worker may receive. For 2019, it is $1,220 month. It may also be possible that the injured worker can return to their employer and work in a position with medical restrictions. If the new position is a lower paid position than the original one, the injured worker is eligible to receive two-thirds of the difference between the new wage and the old wage in workers’ comp benefits.

When an injured worker is found to be totally disabled, they are eligible for benefits for the rest of their lifetime or until they feel that they have healed enough to return to the job. After 104 weeks, however, the insurance company can request that the injured worker take an impairment rating evaluation.

This evaluation is an appointment with a doctor chosen by the insurance company. On the surface, this is to determine if the injured worker is still disabled enough to remain on total disability benefits. The worker must be above a certain level of impairment for this to continue — currently, 35 percent compared to 50 percent in the past. More on that below.

What Happens During An IRE?

The insurance company needs to send a notice to an injured worker that they must take an IRE within 60 days of that 104-week limit. The injured worker must attend the appointment, or they face losing their benefits.

The IRE is a determination by a physician of an injured employee’s whole-body impairment that takes into account work-related injuries.

It is important to understand the differences between disability and impairment. An injured worker’s disabilities are the things that prevent them from doing the tasks that they used to perform at their job. An impairment refers to a person’s physical or neurological condition. For instance, an injured worker may no longer be able to type. That is their disability. Carpal tunnel syndrome is the impairment that causes the disability.

The doctor calculates the percentage of impairment by using the Sixth Edition of the AMA Guidelines for the Evaluation of Permanent Impairment.

After the 104-week period, the insurance company can request up to two IRE examinations within 12 months.

After the appointment, the doctor needs to file a form in which they rate the impairment level of the injured worker.

If a worker receives a rating of less than 35 percent, they can appeal this benefits adjustment to a workers’ compensation judge. They need to file a Petition to Review. They may file this petition any time within the 500-week limit that they are now receiving partial disability benefits.

What to Do and What to Not Do During an IRE

If you receive a notice that you need to have an IRE, there are several things that you should and should not do. 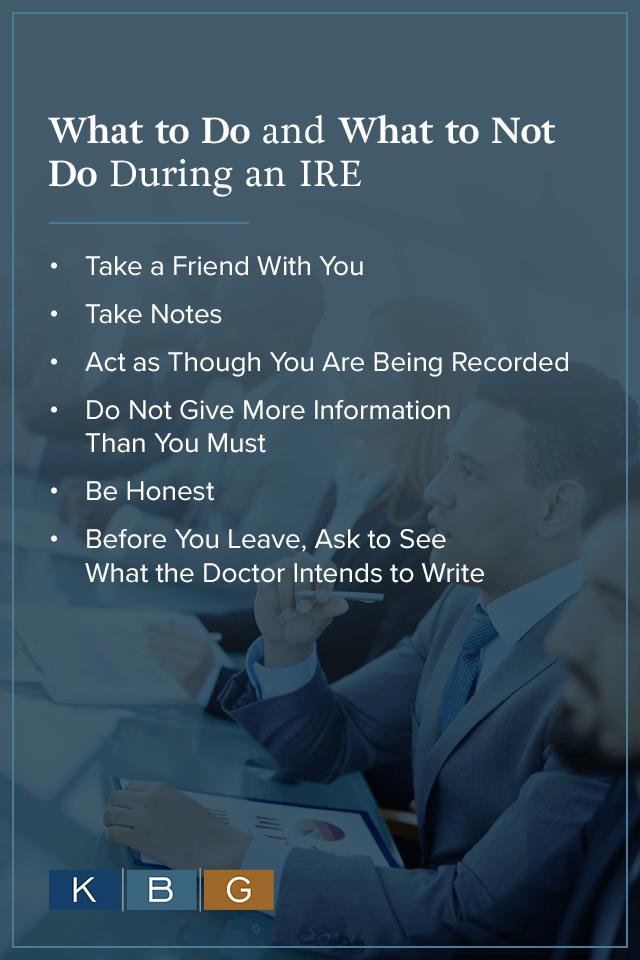 1. Take a Friend With You

It is always a good idea to have someone in the examination room with you. It can be a family member or a good friend. One of the benefits is that they can be taking notes about how the examination went and the questions that the doctor asked you. Doctors are also far more likely to do a fair evaluation if they know that someone is keeping tabs on them.

If you can, make sure you scribble down some notes during the actual IRE. If not, as soon as the exam is over, find a quiet place and write down what you remember about the appointment and the questions the doctor asked.

3. Act as Though You Are Being Recorded

That is because you may be recorded. So do not run across the parking lot to the medical clinic’s front door. Do not bound up the stairs. When you get into the waiting room do not jump out of your chair when the nurse calls you in to see the doctor. Do not jump up on the examining table. Do not run back to your car when the appointment is over. The idea is not to “pretend” that your injuries are worse than they are. You need to be aware, however, that the doctor and their staff are watching these activities very closely, and if you exhibit any of these behaviors, they will be sure to note them in the report.

4. Do Not Give More Information Than You Must

You do not want to engage in small talk with the physician performing the IRE. You do not want to be rude, but you also do not want to be a chatterbox. Do not start talking about the family vacation you have got planned in a month or the work that you have done on your car. When the physician asks you how you are doing, be truthful but be careful. Do not say things like, “Oh, I feel great,” even if it is a relatively good day. It is better to say something like, “Things have been tough, and I hurt a lot. Today maybe a little less than normal but usually it is quite bad.”

When the doctor asks you to describe your level of pain, do not say it is a 10 all the time. If your pain was a level 10 all the time, you would be in the hospital. Describe your pain threshold more accurately. Perhaps it is bad in the morning when you first get up, it may get a little better during the daytime once you warm up a bit, but then by the time night comes and you are more fatigued, it is very painful. Give solid examples of the tasks you are no longer able to perform and how that has affected you and your family. The more accurately you describe your pain, the harder it will be for the physician to give a fuzzy response about your condition on the report.

6. Before You Leave, Ask to See What the Doctor Intends to Write

You have the right to ask — this is not a top-secret document. Seeing what the doctor intends to write will give you a chance to correct any mistakes or misunderstandings the doctor may have included in the report.

What Is All the Recent Confusion About the IRE?

Although it may not be widely known, the IRE only has a relatively recent history of being used to determine benefits in workers’ compensation cases. It was first made a law in 1996. Its objective was straightforward — businesses were complaining about the amount of money they were paying in workers’ compensation benefits, and they wanted a way to cap them. Politicians in Pennsylvania responded by creating the IRE which used an artificially high level of 50 percent to determine whether a worker would continue to receive total disability benefits.

When the legislature passed the original legislation, the law said that the physicians performing the IRE had to rely on “the most recent edition” of the AMA Guidelines to the Evaluation of Permanent Impairments. The Supreme Court found that this was an unconstitutional delegation of the authority of the elected legislature to a private entity, in this case the AMA. Workers’ compensation attorneys had also seen this language as detrimental to their clients’ cases because it meant that the definition of impairment was constantly changing from year to year.

Businesses across the Keystone state howled at this court decision. They could no longer use the IRE to limit the benefits which they had to pay to injured workers. As a result, they pressured the legislature to rewrite a law so it would stand up to constitutional scrutiny.

How Does All This New Legislation Affect Me?

While Act 111 restores the system where insurance companies can ask injured workers to take an IRE after 104 weeks, it does not answer many questions that concern injured workers:

In other words, the entire issue of using the impairment rating evaluation remains very much up in the air.

What Should I Do?

If you are on total disability benefits and you receive a notice from the insurance company to attend an IRE after the 104-week window, contact an attorney who will preserve your legal rights before attending any appointment. The laws surrounding the use of the impairment rating evaluation remain uncertain. Consult with a workers’ compensation lawyer to help you make the best decision when your disability benefits are in question.

An experienced workers’ compensation attorney can also help you determine your status if you fall into any of the categories discussed above, especially concerning the question of the 35 percent versus 50 percent threshold of impairment.

If you are interested in talking to us about your workers’ compensation issues, call us at 1-800-509-1011 or visit our contact page to set up a free consultation. 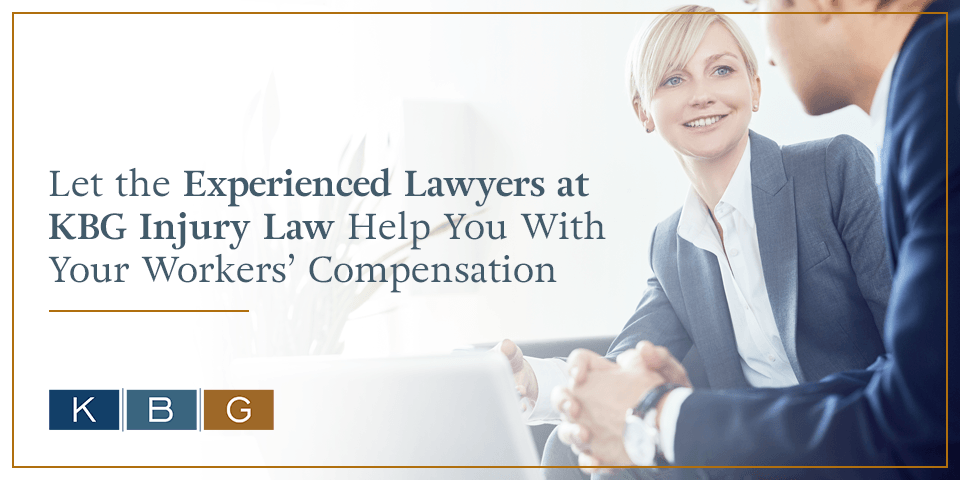