What Are a Lawyer’s Obligations When a Client Has Had a Head Injury?

What Is a Life Care Planner and Why Do I Need One?

What Is the Difference Between Open and Closed TBI?

What Types of Damages Can I Expect to Receive From a Head Injury Claim?

The general phrase “head injury” is often used to describe a traumatic brain injury (TBI). Head injuries range in their level of severity and in their effects on a person. A TBI can be very distressing for both the victim and their close friends and family.

People who have suffered a TBI often experience impairments and difficulties that change their lives forever. Families and friends may see their loved one suffer from life-altering disabilities and lose independence. There may also be substantial medical expenses, loss of income and general pain and suffering. Often, the victim or a loved one will take legal action if another party purposely or accidentally caused the TBI. If so, getting a head injury lawyer involved should be an immediate priority.

What Is Traumatic Brain Injury? 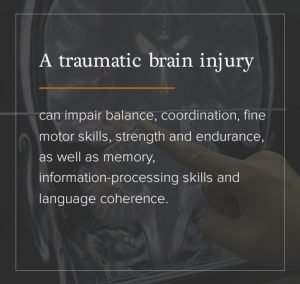 A traumatic brain injury can impair balance, coordination, fine motor skills, strength and endurance, as well as memory, information-processing skills and language coherence. Unlike other injuries that heal without changing who the person is, a brain injury can completely alter an individual’s personality and mental abilities. While injuries like a broken leg or punctured lung are immediately apparent symptoms, it is possible symptoms of a brain injury may not surface for days or even weeks after someone sustains an injury.

There are two main types of head injuries that result from an impact of some kind:

Head injuries can result from a variety of circumstances, from playing sports to tripping on the stairs, so nearly everyone is at risk of experiencing a TBI. Some of the most common causes of TBIs include:

When a head injury is diagnosed, it may be classified as mild, moderate or severe. These classifications, however, do not indicate the seriousness of the effects upon the individual and their family members.

There are several methods of determining the degree of a traumatic brain injury. Two of the most commonly used methods are the Glasgow Coma Scale and the Ranchos Los Amigos Scale:

In addition to these two scales, skilled professionals like neuropsychologists can further define the nature and degree of injury through a series of sophisticated tests. They will also pay attention to any related symptoms the patient is experiencing in the days after the injury. Medical professionals can use this information to develop an effective rehabilitation plan for the brain injury victim.

The signs and symptoms of a traumatic brain injury are not always immediately apparent, especially in the instance of a closed brain injury. The injury may not be visually obvious, and some symptoms may not develop for a few days. In many cases, the affected individual may even report feeling fine immediately after receiving the injury.

Whether they appear right away or are delayed, symptoms often include a combination of:

If any of these symptoms develop shortly after an accident or injury, you should seek medical attention right away. A medical professional will evaluate the symptoms to determine the severity of the TBI. Symptoms and impairments caused by a brain injury could be temporary, long-term or permanent.

Recovering From a Traumatic Brain Injury

It is very difficult for doctors to predict the course of recovery from a traumatic brain injury. Every person experiences different changes and impairments after experiencing a TBI that are largely based on their life prior to the injury, as well as the part of the brain that was damaged. No two brain injuries are exactly the same, and therefore no two outcomes of a brain injury are the same.

Some of the factors that go into predicting life post-injury are as follows:

Since so many factors affect the way an individual will recover after a TBI, it is very difficult to make predictions about their overall recovery. Even more challenging is the evaluation of the long-term effects. Depending on the severity of the injury, victims will experience varying levels of impairment lasting for different lengths of time. Some effects of TBI may never go away.

Long-Term Cognitive Effects of a TBI

Some people with a moderate to severe brain injury experience a variety of cognitive impairments that stay with them for the duration of their lives.

Long-term cognitive effects on life can include:

With proper training and rehabilitation, it is possible for individuals to improve or overcome some of these cognitive impairments, though it may take a significant amount of time and dedication to therapy.

Long-Term Effects on Mood and Behavior From a TBI

In addition to cognitive impairments, individuals with a traumatic brain injury may also experience changes in their mood and behavior. Someone’s personality may be completely different after suffering a brain injury.

Long-term effects on behavior and mood include:

Another important behavior change that occurs in many TBI patients is a lack of awareness about the injury, or even denial. Individuals who are in denial about their TBI often don’t realize the severity of their condition, or are unable or unwilling to distinguish differences in their behavior and abilities from before and after the accident.

Often, people who experience a TBI don’t remember much of the incident or hospitalization, which can contribute to the denial factor. In other cases, the person may be in denial for emotional reasons or even neurological reasons, in which case the damage to the brain limits the ability to recover.

It can be difficult for these people to believe they sustained a serious injury, and therefore, they may not want to seek help to overcome their related impairments. Through the process of neurorehabilitation, a team of professionals will work to help the individual recognize their injury and the lingering effects as they aid them in persevering through challenges.

Though some of the changes in mood and behavior related to a TBI may be permanent, many victims can reduce the impact of the effects over time with rigorous therapy and rehabilitation.

Other Long-Term Effects From a TBI

Cognitive changes, in addition to changes in mood and behavior, are the most common result of a traumatic brain injury. However, depending on the severity of the injury, some people may experience further effects of the brain injury.

Other possible long-term effects of a TBI include: 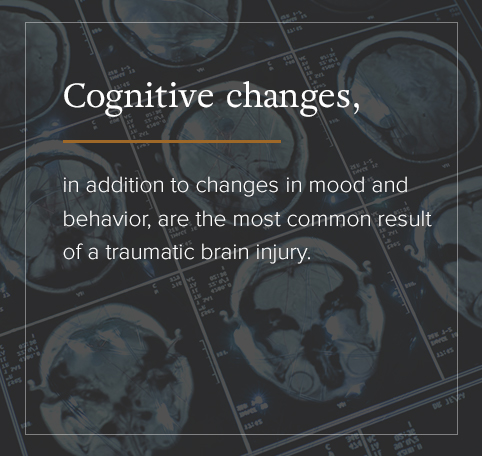 These complications occur in a small percentage of those impacted by TBI, depending on the area of the brain that was damaged and the severity of the injury.

When to Consult a Traumatic Brain Injury Attorney

The most common causes of head injuries are car accidents, whiplash, slip-and-fall accidents, intentional violence and medical malpractice. In many cases, it is possible to prove another party was at fault in causing the brain injury.

If a head injury results in adverse job consequences, personality changes, disrupted family life, disability or other significant issues, knowledgeable brain damage lawyers are essential. If the injury was the result of the careless or negligent behavior of another party, the victim might be eligible for compensation by filing a personal injury lawsuit. Keep in mind there is limited time to file a lawsuit after the injury, so speak with medical professionals and attorneys as soon as possible to take legal action before time runs out.

If the victim cannot file the lawsuit themselves, a family member or loved one may file the lawsuit on their behalf. In instances where the brain injury caused the death of a loved one, a wrongful death claim may be filed for family members to receive compensation. When determining the amount of compensation, judges consider factors such as the severity of the TBI and related impairments. Because determining severity is a main factor in receiving compensation, it is important to seek immediate medical attention so doctors can evaluate the degree of trauma. If you or a loved one has experienced a TBI and would like to take legal action, request a free consultation with a traumatic brain injury lawyer today.