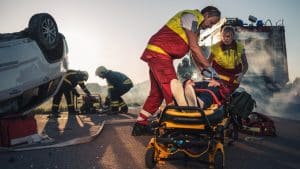 For the first time since the early days of the pandemic, the National Highway Traffic Safety Administration (NHTSA) reports the first decline in motor vehicle crash fatalities. This positive news comes after consistent quarterly increases in traffic deaths since 2020.

On September 19, the NHTSA released preliminary estimates for traffic fatalities for the first half of 2022. Transportation Secretary Pete Buttigieg warned in an NHTSA press release, however:

Traffic deaths appear to be declining for the first time since 2020, but they are still at high levels that call for urgent and sustained action. These deaths are preventable, not inevitable, and we should act accordingly. Safety is our guiding mission at the Department of Transportation, and we will redouble our efforts to reduce the tragic number of deaths on our nation’s roads.

Fatal accidents increased during the pandemic

When the pandemic first began in early 2020, traffic deaths declined, and then started climbing. We wrote previously about how dangerous and risky driving increased during the pandemic, including here in York and throughout Pennsylvania. As drivers returned to the roads, fatalities continued increasing, with the Washington Post reporting:

But as traffic levels have climbed back to pre-pandemic levels, fatalities have remained at their worst levels in years, which experts say has defied easy explanation. Officials point to more dangerous behavior like drunken driving or people not wearing seat belts, while some have cited a combination of changing traffic patterns and unsafe road designs as a likely reason.

In their most recent study, however, the NHTSA projects the second quarter of 2022 (April through June) is the first quarter with a decline in traffic fatalities – after seven consecutive quarters of increases starting in 2020.

The NHTSA projects a decline in fatal accidents

Each quarter, the NHTSA analyzes their own data as well as data from the Federal Highway Administration (FHWA) to project motor vehicle and car accident fatalities across the nation and by state. Their most recent report estimates fatality rates for the first half of 2022, encompassing January to June. The NHTSA reports these rollercoaster statistics: “The increased trend of the fatality rate per 100 million VMT [vehicle miles traveled] in 2020 have continued into the first quarter of 2021, decreased in the second, third, and fourth quarters of 2021, and increased again in the first quarter but decreased in the second quarter of 2022.”

No doubt this is great news. Any decline in fatal traffic accidents is a move in the right direction. However, looking at Pennsylvania in particular, our state saw a slight increase in deadly motor vehicle crashes. The NHTSA projects 558 fatal accidents in Pennsylvania for 2022, as compared to 535 in 2021, a 4.2% increase. This translates to a 1.18 fatality rate for 2022, compared to a 1.17 fatality rate for 2021. Overall, the country’s traffic accident fatality rate dropped from 1.30 in 2021 to 1.27 in 2022.

Per the NHTSA, “These estimates will be further refined when the projections for the first 9 months of 2022 are released in late December.”

How does the NHTSA plan to cut down on traffic fatalities?

In the press release, Ann Carlson, NHTSA’s Acting Administrator, said, “Although it is heartening to see a projected decline in roadway deaths in recent months, the number of people dying on roads in this country remains a crisis.”

The US Department of Transportation (US DOT) is currently working with Secretary Buttigieg on the National Roadway Safety Strategy, aimed at improving our roads, highways, and transportation infrastructures to eliminate preventable deaths and injuries. Some of the improvements currently planned and underway include:

As more cars and trucks return to the roads, the chances of being involved in an accident increase. Even with the small decline of traffic fatalities across the nation, drivers should be on the lookout for reckless and negligent motorists. You should also understand how to protect your rights in the event of a serious crash. After a car accident, the most important thing to remember is you should not leave the scene. Take the following steps:

The attorneys at KBG Injury Law are here to help when you or a loved one suffer injury in a car or truck accident. We work to secure compensation for your medical expenses, lost wages, and pain and suffering. To find out what we can do for you, call our office at 717-848-3838, or complete our contact form to schedule a free consultation. We serve clients out of our offices in York, Lancaster, Hanover, Harrisburg, and Gettysburg, PA.