You may have seen a motorcyclist slipping between you and the car next to you as you are stopped or slowed in traffic. Driving a motorcycle through slow traffic can be frustrating. In these cases, a biker may be tempted to engage in lane split, but doing so could come at a cost.

What Is Lane Splitting? 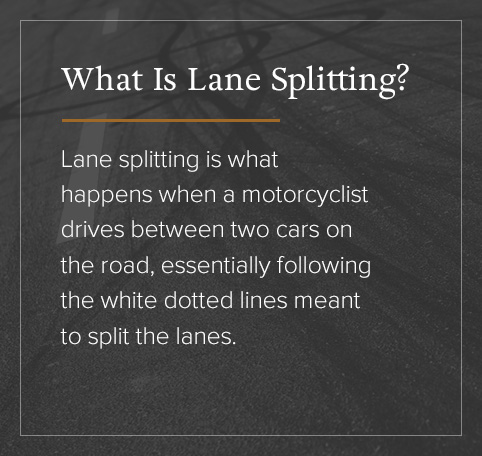 Motorcyclists lane split most commonly in situations where cars and trucks have come to a stop, whether because of a traffic jam or for a red light. That is when motorcyclists may be tempted to zoom between them to avoid the stop.

It is an urge bikers should resist, lest they endanger themselves and others. Lane splitting is illegal in PA and can result in serious issues, including accidents, injuries and legal problems.

How Is Lane Splitting Different From Lane Sharing?

Is Lane Splitting Legal in the United States? 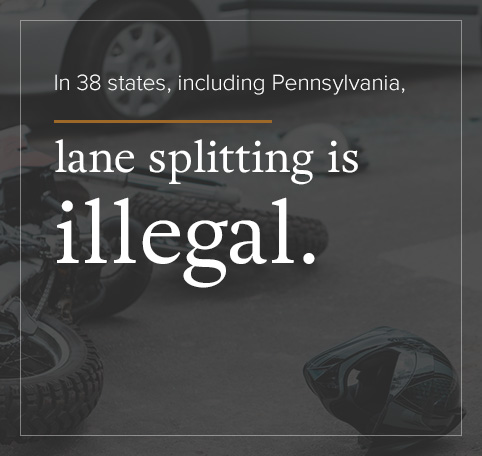 In most of these 12 states, the decision of whether to charge a motorcyclist who is lane splitting with a violation rests with the state trooper or police officer who may see them do it and decides that the motorcyclist is endangering traffic.

Also as of this writing, four states are considering legislation regarding lane splitting law. Washington, Oregon, Maryland and Connecticut all have proposed bills on the subject, but they have yet to have been approved.

Why Is Lane Splitting Illegal?

It is also worth noting that some laws that do allow lane splitting or something similar place restrictions on it. If Oregon’s bill, for example, is passed, it will have at least one limitation. The bill currently allows motorcyclists to lane split on roadways with a speed limit of 50 mph or higher if traffic is going 10 mph or slower.

Why Is Lane Splitting Dangerous?

Lane splitting can, at a minimum, result in a ticket from a police officer. The greater risk, and the reason why lane splitting is illegal, is that it may result in accidents or injuries:

Who Is at Fault in a Lane Splitting Accident?

For all motor vehicle accidents, whether they involve cars or motorcycles, Pennsylvania observes the modified comparative fault rules. This means both drivers could be assigned a portion of the blame for any incident.

For example, if you are in an accident with a motorcycle and the court decides you were 30% responsible for the accident — even if the motorcyclist was illegally lane splitting at the time — and you were awarded $50,000 in damages, you would only receive $35,000 because of the comparative fault provision.

In what situation might you be 30% responsible for an accident with a motorcyclist who was lane splitting? Perhaps you made a turn without signaling or bothering to check if there were any other vehicles. Maybe you had a couple drinks before you got into the car and you were swerving a bit as you drove home.

It is much more of a gamble for the motorcyclist, however, because in the majority of cases, a motorcyclist who is illegally lane splitting is more than 51% responsible for an accident. This means that even if the motorcyclist were severely injured, they would not be eligible for any compensation.

Why Do Some Motorcyclists Lane Split?

Proponents of lane splitting, such as the American Motorcyclists Association, allege that when done correctly, lane splitting can be safe. It reduces the chances that motorcyclists will rear-end another car. They argue that if they can ride between cars, it will also greatly reduce traffic congestion, which they say is a great danger to people on motorcycles.

Advocates for lane splitting argue that congested traffic — where vehicles move slowly in a stop-and-go pattern and drivers are distracted or inattentive — pose major threats to motorcyclists if they must follow behind them.

Those who are opposed to lane splitting — in particular, police and safety organizations — vehemently disagree. They believe that when a motorcyclist attempts to lane split, they put themselves and all the drivers around them at risk of an accident.

Why Is There Such a Controversy Over Lane Splitting?

One reason why lane splitting remains controversial to both proponents and opponents is that there has been very little research done on the safety of lane splitting. And both sides tend to use the research that has been done to bolster their arguments.

The University of California at Berkeley has conducted the bulk of the research so far. They published a study on the safety of lane splitting in May 2015. On one hand, the study showed that motorcyclists who lane split, especially in congested traffic, are much less likely to be hit from behind, suffer fewer torso or head injuries and are less likely to be killed in a crash.

This part of the report has been fuel for many proponents of motorcycle lane splitting in their attempts to convince legislators across the country to legalize it.

On the other hand, the study also showed that between June 2012 and August 2013, more than 17% of the 6,000 collisions in California involving motorcyclists were caused by lane splitting.  For those who oppose lane splitting, the fact that almost one-fifth of the accidents involving motorcyclists in California — a state where the practice was tolerated for many years and is now legal — are caused by lane splitting is more than enough reason to say it should stay illegal.

For the moment, those opposed to lane splitting are winning the battle. Over the past several years, pro-lane-splitting legislators in as many as 15 states have introduced bills that would legalize the practice, but they have been unable to garner enough support to turn it into law in any state except California, though, as we mentioned above, modified versions are allowed in some states.

In 2010, Arizona tried to introduce a one-year pilot program to study lane splitting, but it was knocked down by former Governor Jan Brewer. She cited safety concerns and the lack of time to properly educate the public about the changes as the reasons behind her veto.

Both sides have the backing of large organizations. The pro-lane-splitting side points to the National Highway Traffic Safety Administration, who said the practice should be studied because of its traffic congestion reduction benefits. Meanwhile, opponents of the practice are backed by the American Automobile Association (AAA), which has been important in helping to defeat attempts to legalize lane splitting in Texas and Georgia.

The current attempts and considerations of pro-lane splitting law could cause a ripple throughout the country. If any of these attempts are successful, it is possible that there will be lawmakers who will try the same thing in Pennsylvania.

At the moment, however, as noted above, lane splitting in PA is illegal. If you are a motorcyclist who lane splits, you not only open yourself up to the possibility of serious injuries but also devastating financial problems as well.

What Is the Best Way to Avoid Being in an Accident With a Motorcyclist?

There are more than 800,000 motorcyclists in Pennsylvania, so the chances that you will find yourself driving near one are quite good. If you want to avoid an accident with a motorcyclist, here are some tips:

What Should I Do If I Am Involved in an Accident With a Motorcycle That Is Lane Splitting?

You may be entitled to damages after being involved in a motorcycle lane split accident. Remember that you need someone on your side who can be an advocate for you when you have been involved in any type of motor vehicle accident. After a crash, you are often not feeling your best — especially if you have been hurt in any way. A trustworthy lawyer who is experienced in dealing with automobile accidents will help ensure you file all the right forms on time, represent you in court if need be, not allow you to be taken advantage of by insurance companies and make sure you receive any compensation for which you are eligible.

If you have been injured in a car crash that involved lane splitting, you may qualify to seek damages. We can help you determine whether to proceed with your case and give you advice on your unique situation.

Our experienced and knowledgeable lawyers can help deal with your insurance company and the motorcyclist’s insurance company if need be. We treat all our clients as individuals and give each case the weight and attention it deserves.