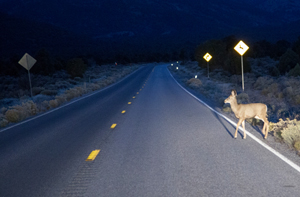 Pennsylvania ranks third in the nation for deer-related collisions, according to a 2019 report, trailing West Virginia and Montana.

Last year, nearly 3,500 deer vehicle collisions occurred in Pennsylvania, with nine deaths caused by those who hit a deer. But these numbers do not include the large number of people who swerve to avoid the deer and instead hit an embankment, tree or utility pole, which results in more than 24,000 collisions and more than 400 deaths — and that doesn’t include the number of people who collide with traffic in the oncoming lane or whose vehicles roll over.

That’s why it’s imperative to not leave your lane of travel, even if you hit a deer. It’s predicted 1 in 70 Pennsylvanians will hit a deer during the next 12 months, with those odds doubling in October, November and December, during deer mating and hunting season.

However, if you swerve to avoid contact with the deer and end up running into another vehicle or object (such as a tree or guardrail), the collision portion of your policy will apply.

Ultimately, it’s best to have enough reaction time that you do not hit a deer or swerve. Here are a few driving tips to lengthen reaction time:

If you or someone you know has been involved in a deer vehicle collision and has questions regarding insurance coverage, call on the KBG team for help. We’re here 24/7 to get the Results You Deserve®.