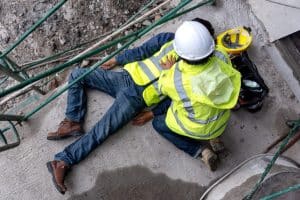 The construction industry is one of the most dangerous sectors to work in for various reasons, particularly accidents. Many serious injuries occur at construction sites, where employees are required to work with hazardous equipment, heavy machinery, dangerous chemicals, airborne materials, dust and other contaminants, and excessive noise.

According to the Occupational Safety & Health Administration (OSHA), the four major causes of fatal injuries in the construction industry include falls, electrical exposure, struck-by, and caught-in/between situations. According to OSHA, these “Fatal Four Hazards” result in approximately 545 worker fatalities in the U.S. each year, and falls are the number one cause of death for construction workers.

In July 2022, a construction worker died from his injuries after falling five stories from an open window at the demolition site of the former Days Inn Penn State at State College, Pennsylvania. A preliminary investigation found that the fall was accidental, but OSHA is currently investigating the incident and will release its findings within six months.

In another incident, a Strasburg framing contractor disregarded federal workplace standards and exposed workers to falls as high as 14 feet while working at a Pennsylvania Department of Transportation facility in Luzerne, PA. According to a news release from OSHA, the company was cited for two willful and five serious violations related to the company’s failure to protect workers as they performed carpentry work from elevated surfaces, exposing workers to falling or being hit by flying objects, and neglecting to train workers on scaffold-related risks. The proposed penalties could exceed $247,000.

Fall injuries are widespread in the construction industry, frequently due to lost footing while working from heights, lack of guardrails, loose boards, protruding nails and bolts, gaps in a walking surface, unsafe ladders or aerial lifts, support structures giving way, and inadequate fall protection. There are also numerous substances and debris that can cause a fall to occur on a construction site, including mud, water, grease, oil, dust, powders, plastic wrapping, hoses, cables, cords, and general clutter.

A slip and fall at a construction site sometimes result in minor injuries like sprains, strains, bruises, and abrasions. However, a severe fall can lead to extremely serious or even permanent injuries, such as:

In some cases, the injuries that construction workers suffer in falls will be fatal or result in permanent disability.

Injuries suffered due to falls at construction sites can negatively impact an employee’s life in a variety of ways, including:

However, most employers in Pennsylvania are required to purchase workers’ compensation coverage, an insurance policy that pays benefits to employees who sustain work-related injuries. When construction workers are hurt while in the course and scope of their employment, their injury is covered, no matter where it occurred.

Workers’ compensation typically pays the following on behalf of the injured worker:

However, workers’ compensation insurance does not cover pain and suffering and will not provide job security in the event of a work-related injury.

Liability for construction site injuries in and near York, PA

It is not unusual for a construction worker to sustain an injury due to the negligence of a third party. Negligence is the failure to act with the level of care that an ordinary person would have used in similar circumstances. Although negligence typically refers to careless actions taken, it can also be characterized as the failure to act when a duty to act exists. In such cases, injured workers may be able to pursue both workers’ compensation benefits and potentially file a personal injury claim alleging negligence against the party responsible for their fall and subsequent injuries.

To determine who may be liable for injuries resulting from a construction accident, the duties and legal responsibilities of those involved in the project must be analyzed. While large construction projects typically involve delegation of both work and legal responsibility, smaller projects are often managed through general contract relationships. Depending on the size and circumstances surrounding a construction project, there can be various individuals involved in the work, including:

Property owners, general contractors, and subcontractors may be held to several legal standards when determining liability for a construction accident, including safety regulations provided under the Occupational Safety and Health Act of 1970.

Were you or someone you love seriously injured in a fall at a construction site? Contact KBG Injury Law or call 717-366-8080 and set up a free initial consultation today to discuss your case today. Our attorneys provide representation to injured people throughout South Central Pennsylvania, including the cities of York, Lancaster, Hanover, Harrisburg, and Gettysburg.