Commercial truck accidents are often complex because the relationships between parties can be complicated. For example, a truck carrier may hire drivers on an independent contractor basis and may lease some or all of their equipment. The cargo being transported on leased trucks may be owned by another party entirely.

If you are in a trucking accident involving this type of vehicle, in the past it may have been difficult to secure compensation for your injuries. The truck carrier may have claimed that since the driver was an independent contractor, the company could not be held liable for any injuries the driver caused. Similarly, the carrier could also claim it was not responsible for damage caused by leased trucks.

Many courts, however, have developed the theory of “logo liability.” Under this theory, trucks with a mandatory carrier logo on the truck operate with the understanding that the driver is an employee for the purposes of the transport and that the truck carrier is responsible for the cargo and the truck, regardless of the leasing and ownership status of all components. In theory, this should make it easier to seek compensation if you have been injured in a trucking accident.

In practice, of course, it is not always that simple. The logic behind logo liability has been challenged and is not used equally across all states. Whether someone who has been in a truck accident can employ logo liability in a claim depends partly on the location of the accident. First, let us explore how logo liability came about.

An automobile accident involves one or more drivers. They are usually driving their own cars, or perhaps a rented car. In any case, if they were involved in an accident, any costs for which they are responsible are paid for by their liability insurance, which all automobile drivers are supposed to maintain.

It is different if you have an accident with a truck, however, because in many cases the driver either does not own the vehicle or owns the vehicle but does not work for the company. In most cases, that means that they fall under the description of an independent contractor.

Over time, different courts across the country developed the theory of logo liability. Any time a company leases an independent contractor’s truck or trucks, those trucks must display the logo of the company as long as the independent contractor is doing work for them. Logo liability means that when the company’s logo or sign can be seen on a truck, the driver is considered an employee for purposes of liability for the trucking company.

That means that an independent contractor will be treated like an employee. Drivers who have been involved in accidents with these trucks could sue the trucking companies for liability. Accidents involving trucks often result in very serious injuries or fatalities. Before the regulation existed, injured drivers could sue the driver of the truck, but their liability coverage often did not provide anywhere near enough money for the injured parties. Logo liability changes that.

Are Trucks Covered With Logo Liability in All States?

As courts began to develop this theory, the Interstate Commerce Commission tried to water down the impact of these regulations and in 1986 added a new paragraph to the existing regulation that stated that it did not intend for the regulation to create an employment relationship in the way the courts interpreted it.

As a result, courts in some states started to interpret the law differently. While the presumption that the driver was an employee still existed, some courts interpreted the law to allow the trucking company to rebut this argument and disprove it. Most states still hold that logo liability means the trucking company can be held responsible for trucking accidents when independent carriers display their logo.

In the Truck Business, Why Is Logo Liability Important?

Logo liability may make a huge difference in any damage claim awarded to you or your family members if you are injured or killed in a truck accident. Consider:

As noted above, if you are involved in an accident with a truck, you can sue the driver even if the accident happens in a state where logo liability does not apply. But if logo liability does apply, victims have the option of suing the company that had employed that driver for the purposes of that delivery. In most cases, larger trucking companies have much more insurance coverage than smaller owner-operators.

How Do I Use Logo Liability If I Am Involved in an Accident With a Truck? 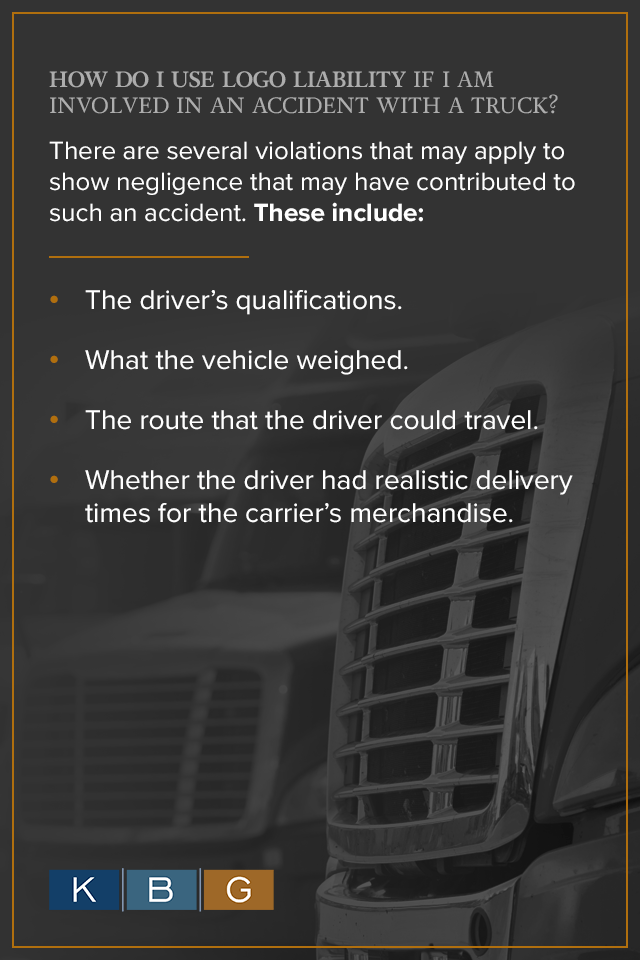 In jurisdictions where courts still apply the theory of logo liability, trucking companies can be held liable if they lease their equipment or use an independent contractor and the driver is involved in an accident. There are several violations that may apply to show negligence that may have contributed to such an accident. These include:

Other factors that may come into play include:

What Are the Causes of Trucking Accidents?

Truck accidents, particularly those involving big rigs, can have catastrophic results for the other parties, especially if they are in a passenger car. Some of the factors that can contribute to these kinds of accidents include:

What Should I Do If I Am Involved in an Accident With a Truck?

In addition to taking the same steps you would in any accident, if you are involved in an accident with a truck there are several other things you need to do. Find out if the driver is an employee of the company, an independent contractor driving their own vehicle, or operating a vehicle under a lease.

Take the names and contact information for all the companies the driver may have been working for. In some situations, this involves more than one company. All companies involved can be held liable. While you normally take pictures of any damage in an automobile accident, also take pictures of any logos or signage on the truck.

How Can a Lawyer Help Me Determine If Logo Liability Is Involved in a Truck Accident?

There are certainly lots of complicated questions. An experienced Pennsylvania personal injury lawyer will know how to find the answers to these questions and determine if you can apply logo liability your lawsuit. And if logo liability can be used, your attorney will know how to present that case to result in the best outcome for you and your family as you struggle with covering your medical bills or making up for lost wages.

If You Are Involved in an Accident With a Trucking Company, Contact KBG Injury Law

If you have been injured in a trucking accident and would like legal counsel or would like to explore your legal options, contact KBG Injury Law for a consultation. The lawyers at KBG Injury Law have experience with invoking logo liability and have already secured large settlements and trial victories for clients injured in trucking accidents. The uncertainty when you are involved in an accident with a truck can be frustrating. Contact us today to discuss the particulars of your case. 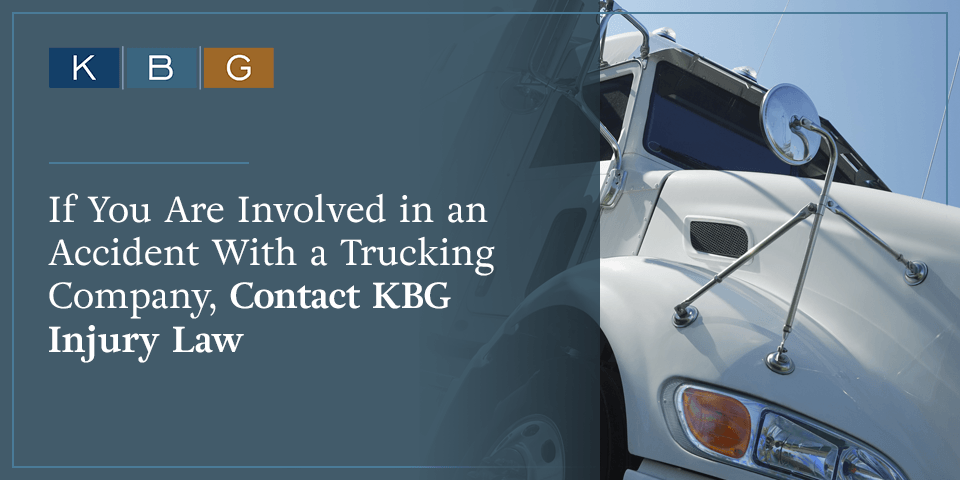