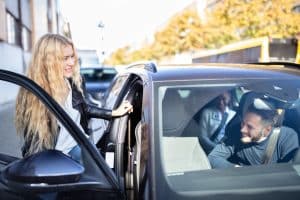 Numerous fatal traffic accidents in the U.S. involve drunk drivers, and there’s no conclusive evidence proving that ridesharing reduces drunk driving. However, recent research seems to support the notion that rideshare services like Uber and Lyft help to reduce motor vehicle accidents and the subsequent injuries related to impaired driving.

Christopher Morrison, an assistant professor of epidemiology at Columbia University, recently reviewed 20 studies that examined ridesharing. Seventeen of those studies linked ridesharing to fewer alcohol-related accidents. According to Morrison, who analyzes drinking and the problems it creates – including drunken driving and crashes – the evidence is clear. “One way to prevent these problems is by changing the environments in which people drink,” he said. “Ridesharing changes the transportation environment.”

Research conducted by McGovern Medical School at the University of Texas Health Science Center in Houston supports Morrison’s conclusion. The study found that after Uber was introduced to Houston in 2014, the following occurred:

According to the UT researchers, “Introducing rideshare services to the Houston area was associated with a significant decrease in MVC trauma and impaired driving convictions,” particularly in those 30 years old or younger. The researchers reviewed rideshare data for Uber trips taken in Houston between January 2007 and December 2018, analyzing more than 24 million rides.

However, other studies have produced mixed reviews regarding the relationship between ridesharing and traffic fatalities. One study found that Uber lowers the rate of DUIs and fatal accidents, although the relationship between the two could be negative or positive. Other research focused on city-level rollouts of Uber and Lyft and concluded that ridesharing increased traffic congestion, major traffic accidents, and a 2 to 4 percent increase in the number of fatal traffic accidents.

Why does ridesharing make a difference in the frequency of drunk driving accidents?

Designated drivers, carpools, and taxis have been around for a long time, so why does ridesharing affect accidents and injuries related to impaired driving?

According to a 2021 UPI report, ridesharing is less expensive, more convenient, and easier to access than taxis, and designated drivers and carpools can be unreliable. Here are more reasons that rideshare apps can help decrease drunk driving accidents:

Another reason for the popularity of Uber, Lyft, and other such services: according to Investopedia, rideshare customers also typically get where they are going faster than they would via taxis.

Drunk driving in Pennsylvania is still a major concern

According to the Pennsylvania Department of Transportation (PennDOT), traffic fatalities in the state increased 9 percent from 2020 to 2021. However, fatalities in accidents involving driver impairment dropped from 471 in 2020 to 450 in 2021. Although impaired driving fatalities in the state have decreased over the past 15 years, they continue to remain high, accounting for over 35 percent of the traffic deaths reported in 2021.

Pennsylvania recently toughened the penalties for repeat DUI offenders when it passed “Deana’s Law” in July 2022. Deana’s Law is named after 45-year-old Deana DeRosa Eckman, who was killed when she was hit head-on by a drunk driver who was driving with a blood alcohol level more than twice the legal limit – it was his sixth DUI. When it takes effect in November 2022, Deana’s Law will revise sentencing for habitual DUI offenders from concurrent sentences (serving multiple sentences at the same time) to consecutive sentences (serving each sentence in succession).

Pennsylvania has a three-tier system for DUI violations:

A combination of an individual’s BAC level and prior offenses determines the licensing requirements and penalties for those convicted of DUI. Minors, commercial truck drivers, the operators of school vehicles or bus drivers, and those involved in an accident that leads to injury or property damage may be subject to high BAC penalties, even if their BAC does not fall into the high BAC category. Those who refuse breath or chemical testing may be subject to the highest BAC penalties. The state focuses on treatment for first-time offenders rather than just punishment and license suspension.

Although there is evidence that rideshare services may decrease the incidence of drunk driving accidents and serious injuries, many people still make the wrong choice and drive while under the influence. While everyone makes mistakes, some can affect your life and the lives of others more than others. If you were injured by a drunk driver in Gettysburg, regardless of whether you were in an Uber or Lyft at the time, we can help. If you were hurt because of a negligent Uber or Lyft driver, we can assist with that as well.